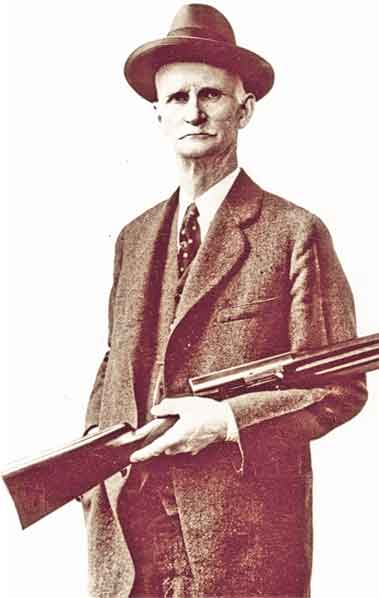 OCT. 1869
John assembles a slide rifle out of spare parts.

MAY 12, 1879
The application for patent on the single shot rifle is filed.

1880
With the aid of his brothers, John Browning establishes his arms factory in Ogden.

MAR. 20, 1882
Patent application is filed on bolt-action repeating rifle with a tubular magazine.

SPRING, 1883
Mr. T. G. Bennett, Vice-President and General Manager of Winchester Repeating Arms Company, comes to Ogden, Utah Territory, and forms an alliance that is to last nineteen years and is to change the course of firearms development. As part of the transaction, the Single Shot is sold to Winchester, and Mr. Bennett is assured of first rights on a new repeater. The Single Shot becomes the Winchester Model 1885.

OCTOBER, 1884
Patent No. 306,577 is granted on the new repeater and John, together with his brother Matt, travel to New Haven, Connecticut, to deliver to T. G. Bennett what is to become the famous Winchester Model 1886.

MAR. 28, 1887
John leaves for Georgia to spend two years as a Mormon missionary.

FALL, 1889
Begins development of the first models that were designed to employ the expanding gases behind the bullet to operate the action.

JAN. 19, 1894
Files patent on what would become the Winchester Model 1894, the first repeating action sporting rifle to handle smoke-less powder cartridges. This rifle is ascribed by many to be the most popular high powered rifle ever built.

NOV. 19, 1894
Patent is filed on a lever action repeating rifle with a non-detachable box magazine de-signed for jacketed sharp-nosed bullets. Marketed as the Winchester Model 1895.

JULY 17, 1897
A contract between Browning and Fabrique Nationale is signed which authorizes the Belgium firm to manufacture a blowback operated, 32-caliber semi-automatic pistol for all markets outside the United States. Production commences in 1899.

FEB. 17, 1899
Application for patent is filed on a single shot 22-caliber plinking rifle known as the Winchester Model 1900.

FEB. 8, 1900
The first of four patents is filed on the revolutionary autoloading shotgun. It would be manufactured by Fabrique Nationale in 1903 and by Remington Arms Company in 1905.

OCT. 6, 1900
The first successful auto-loading high-power rifle receives Patent No. 659,786. U.S. manufacturing and sales rights are granted to Remington Arms Company, and the rifle first appears in 1906 as the Model 8.

JULY 16, 1901
Browning submits a blow-back operated 32-caliber semi-automatic pistol to Colt, who immediately accepts it. The marketing agreement stipulates that the pistol will be priced low enough to compete with the revolvers of the period.

JAN., 1902
In a disagreement about the public acceptability of the auto-loading shotgun, John Browning severs his nineteen-year relationship with T.G. Bennett of Winchester.

JAN. 8, 1902
An appointment is made to show the new shotgun to Mr. Marcellus Hartley of Remington. This meeting is cancelled due to Mr. Hartley’s untimely death that afternoon.

FEB., 1902
With his autoloading shot-gun securely tucked under his arm, John Browning embarks on his first ocean voyage. He offers the new shotgun to Fabrique Nationale.

JULY 10, 1903
Patent application is filed on a pump action shotgun that would become the Stevens Model 520. SUMMER,

1903
At the request of FN, Browning develops a 9mm military semi-automatic pistol.

1904
In the face of restrictive tariffs, FN agrees to cede to Remington the rights to manufacture and sell the autoloading shotgun in the United States. It appears as the Remington Model 11.

JUNE 21,1909
The application for a patent on a 25-caliber semi-automatic pistol was filed. It is manufactured and sold by both FN and Colt. It is part of the Browning Arms Company line from 1955 to 1969.

FEB. 17, 1910
Patents were filed on a 45-caliber semi-automatic pistol. It serves as the official United States military sidearm for al-most 75 years.

NOV. 26, 1913
Files patent on a pump shot-gun that would be marketed as the Remington Model 17. It is John M. Browning’s last repeater-type shotgun.

JAN. 6, 1914
Patents are granted and production begins on a semi-automatic 22-caliber rifle. Remington also produces this rifle as the Model 24.

JULY, 1917
Begins work on the 50-caliber Water Cooled Machine Gun. Completed too late for World War I, this weapon plays a prominent role in World War II and Korea.

JULY 26, 1919
Patent application filed on a 22 pump action rifle that would be produced exclusively by Fabrique Nationale.

OCT. 15, 1923
The first of two patents are filed on the Superposed Over/ Under shotgun.

SEPT., 1927
J.M. & M.S. Browning Company is incorporated in Utah with the Browning Arms Company as a subsidiary.

1928
The Superposed shotgun is introduced into the Browning Arms Company line.

1940-42
After the German occupation puts a stop to Belgian production, Remington makes an American-made Auto-5 for Browning. This is their Model 11, but included the magazine cut-off, which was not a part of the Model 11. U.S. entry into the war ended this production.

1945-49
Remington resumes making the American-made Auto-5 for Browning until discontinuing production of the Model 11 to introduce their new 11-49 auto-loader.

1965
Browning begins negotiations with Miroku Firearms in Japan. Enters the sailboat business with the acquisition of Newport Boats of California and Virginia. Assets liquidated in 1976.

1966
Archery accessories added to the line.

1969
Acquired Harwill, Inc., manufacturers of Fiberglass out-board and inboard motorboats as well as small aluminum boats and canoes. Liquidated in 1974. BL-22 Lever Action 22 rifle and knives added to the line.

1974
Browning line was enlarged with the B-2000 automatic shotgun in 12 gauge, the Citori 20 gauge and the Citori Trap & Skeet models.

1978
Browning enters the company’s Centennial year. To commemorate this event, five limited Centennial editions were prepared. The included a Super-posed Continental over/under rifle combination, a Centennial edition of the Jonathan Browning Mountain Rifle, a replica of the Winchester Model 1892 called the Centennial Browning 92, a chromed version of the 9mm Hi-Power, and a special set of folding knives.