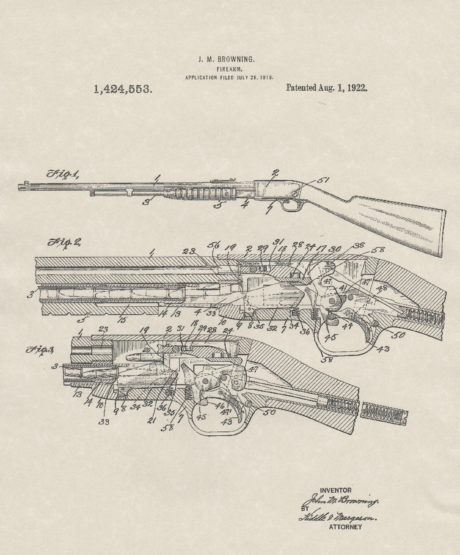 To all whom it may concern:  Be it known that I, John M. BROWNING, a citizen of the United States, and a resident of the city of Ogden, county of Weber, and State of Utah, have invented certain new and useful Improvements in Firearms, of which the following is a specification. My invention relates to an improvement in repeating firearms and an object thereof is the provision of a firearm provided with a combined sliding magazine and action slide which may be removed from the receiver of the firearm without removing the handle of the magazine. Another object of the invention is the provision of an unbroken guide way for the head of a cartridge, from the time the cartridge leaves the magazine until it is in place in the chamber of the firearm. A. further object of the invention is the provision of a combined slide and trigger. Rock whereby the trigger is moved into position to engage with the notch in the hammer and hold the hammer in cocked position, whether finger pressure on the trigger is exerted or not, said trigger being locked in such position from the time the hammer’ has reached the limit of its rearward movement until the action slide has been forced forward to the firing position, when the trigger is unlocked and the action slide locked in its full forward position.

Fig. 5 shows in sectional elevation the positions assumed by the various parts of the firearm when the same is ready to be dis 8 charged, the action slide in this view being shown in locked position and the trigger unlocked; and the hammer at full cock; .Fig. 6 is a view taken on the line 66 of 5, Fig. 7 is a part sectional view showing the breechblock moved out of the ejecting opening in the receiver ; Figs. 8 and 9 are views in perspective of 9 a portion of the action slide and the breechblock respectively; and Fig. 10 is a section taken on the line 1040 of Fig. 5. Referring to the drawings in detail, 1 designates the barrel of a firearm, 2 a receiver carried thereby and 3 and 4 a sliding magazine and action slide respectively, fastened rigidly together and carried beneath the barrel 1 and held in place in the receiver 2. 5 designates a handle secured to. the magazine 3 whereby the latter, together with the action slide 4 may be reciprocated for the purposes hereinafter set forth. To all whom it may concern: Be it known that I, JOHN M. BROWNING, of Ogden, in the county of Weber and State of Utah, have invented a new Improvement in Firearms; and I do hereby declare the following, when taken in connection with the accompanying drawings and the letters of reference marked thereon, to be full, clear, and exact description of the same, and which said drawings constitute part of this specification, and represent, in—Figure 1,a view in side elevation of the left hand side of an automatic firearm constructed in accordance with my invention; Fig. 2, a similar view of the right hand side thereof, showing the ejection opening formed in its receiver or gun frame; Fig. 3, a broken view, in vertical longitudinal section, showing the gun in the closed positions of its parts; Fig. 4, a less comprehensive broken view of the gun in vertical section drawn to full size and with the parts in their closed positions and with the trigger plate and all of its connected parts removed for the sake of clearness; Fig. 5,a detail section showing the breech bolt in its closed position, but with the locking block thereof in the unlocked position into which it is moved by the rocking tumbler.

Fig. 5°, a detached perspective view of the locking, block; Fig. 5°, a corresponding view of the operating tumbler thereof; Fig. 6, a broken view of the gun in vertical section, showing its parts in their open positions; Fig. 7, a detail view showing the co-action of the hammer with the two hooks constituting the double sea: of the trigger; Fig. 8, a corresponding but more comprehensive view showing the hammer, the trigger with its two books, and a safety catch which is here represented in its blocked or inoperative position; Fig. 9, a broken view of the gun in vertical section, showing the parts of the gun in the positions due to them when the gun has been opened manually instead of automatically. In this view the trigger plate, with its connected parts has been removed for the sake of clearness; Fig. 10, a broken view, in vertical section, of the receiver on the line a b of Fig. 2. My invention relates to an improvement in automatic portable firearms of the class in which the recoil following the explosion of a cartridge in the gun barrel is utilized to operate the breech mechanism of the gnu, the object of .my present invention being to produce an improved arm of this class in which the recoiling parts are housed for their protection, as well as the protection of the user of the arm, and in which the parts are constructed with particular reference to simplicity, of construction, strength, durability, and reliability of operation. With these ends in view my invention consists in certain details of construction and combinations of parts, as will be hereinafter described, and pointed out in the claims. In carrying out my invention as herein shown I provide a gun barrel A with a tube-like extension A’, into the forward end of which the barrel is screwed. This extension is located within and housed by the upper portion of the gun frame or receiver B, in which the extension reciprocates hack and forth, together with the barrel, the rear end of which centers the receiver during the recoil following the explosion of a cartridge in the barrel.