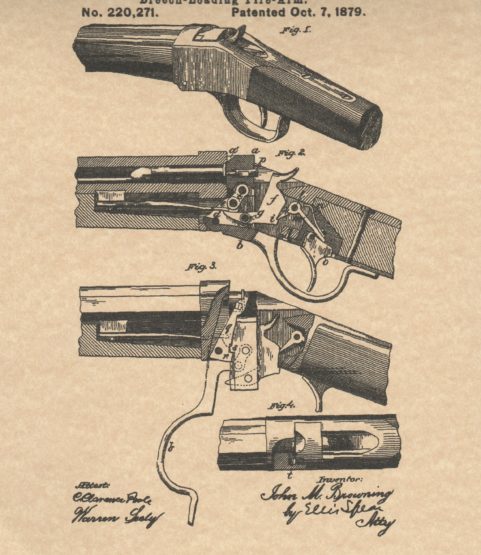 To all whom, it may concern: Be it known that I, JOHN M. Browning, of Ogden City, Utah Territory, have invented an Improvement in Breech-Loading Fire-Arms, of which the following is a specification. My invention relates to breech loading firearms, and consist in certain details of construction, hereinafter fully described and particularly indicated in the claims, whereby the operating parts are greatly simplified and rendered more durable and certain in their opening. In the drawings, Figure 1 represents a perspective view of the breech and a part of the stock of my improved gun. .Fig. 2’represents a longitudinal vertical section of Fig. 1, some of the ‘parts being shown in side elevation. Fig. 3 is a side elevation, the case being partly broken away to show the interior mechanism. Fig. 4 is a top view, some of the parts being broken away to show the position of the cartridge in place and the retractor.

My invention relates particularly to that glass of breech loading firearms in which the breech is closed by a vertically sliding block operated by the guard-lever, and carrying the hammer with it in its motion up and down: The breech-block a slides vertically within the breech: piece to which it fits closely, and against which it bears both in front and rear, so that when it is raised it effectually and securely closes the breech of the gun. This breech-piece is moved by the guard-lever b, to which it is connected by the link c, within the slot in the interior of the block. The guard-lever b is pivoted to the breech-frame at d. Tightly in front of the breech block. The guard is also formed with lugs e-e, adapted to lit into the slotted breech-block and to receive between them the link c, to which they are connected by a pin at a point within the slot when the guard is brought into a position for firing.

The guard-lever is also’ so constructed that when it is brought into the position last specified it effectually closes the opening through which the block and the hammer move when the lever is depressed, as in opening the breech. The hammer f is pivoted to the block at g, within the slot of said block. The tail of the hammer extends through the slot and rests, when the block is raised, under the end of the spring h, which is secured to the barrel, as shown in Figs. 2 and 3. The breech-piece is slotted to the rear sufficiently to give space for the hammer when at full cock. The hammer is constructed with an offset at i, against which the dog k bears, when the breech-block is raised, to close the breech. This dog is pivoted at 1, and is provided with an arm, and spring, the latter bearing against the Shell in the breech-frame, so as to keep the arm on pressed down against the trigger o.

The breech-block is supported when the guard-lever is closed by means of the links and lugs e e, the pivot pin which connects the said link and lugs being carried into line with the other link pin and pivot of the guard-lever, or slightly past the dead point, so as to :securely lock the block in closed position. The firing pin is of the ordinary construction, and is represented at p. retractor is shown at q. To all whom it may concern:  Be it known that I, JOHN M. BROWNING, of Ogden, in the county of Weber and Territory  of Utah, have invented a new.  Improvement in Magazine Firearms; and I do hereby declare the following, when taken in connection With accompanying drawings and the letters and figures of reference marked thereon, to be a full, clear, and exact description of the same, and which said drawings constitute part of this specification, and represent, in—Figure 1, a broken view partly in section and partly in inside elevation of a magazine fire-arm constructed in accordance with my invention, and shown in its closed position; Fig. 2, a plan view of the arm; Fig. 3, a. view ‘Corresponding to Fig. 1, but showing the gun its open position; Fig. 4, a view in transverse section on the line of Fig. 1, looking rearward; Fig. 5, a view in transverse section on the line x–a; of Fig. 1, looking forward ; Fig. 6, a detached reverse plan view of the sliding breech block; Fig. 7, a detached plan view of the carrier; Fig. 8, a view thereof  in transverse section on the line z—z of the preceding figure. My invention relates to an improvement in magazine firearms, the object being to produce a simple, compact, safe and reliable gun, in which the number of parts and the liability to derangement are reduced, which is constructed with particular reference to avoiding the choking of the gun by the incorrect presentation of a cartridge, or the failure of  a cartridge to be properly handled by the breech mechanism, and which is designed to adapt the gun to take a longer cartridge than has heretofore been available for use in a similar gun having a receiver of the same  .

With these ends in view, my invention con its in a magazine firearm having certain de, .tails of construction, as will be hereinafter described and pointed out in the claims.   My improvements are applied to a gun having a barrel A, magazine B, receiver C, and stock D, all of approved construction, and not _needing special description or illustration. .In carrying out my invention, I employ an 5o, operating  plate E, hung at its forward or muzzle end on a horizontal .pin E’, and moving up and down in a vertical plane on the said pin as a center. The extreme forward end of this plate is constructed with a lug or nose e, which rises, when the rear end of the  plate is depressed, into the path taken by the cartridges 2, as they emerge from the magazine into the receiver, whereby the said lug or nose forms a magazine cutoff operating to prevent more than one cartridge from entering the receiver at a time. The said nose or lug rises into the path of the cartridges at the beginning of the opening movement of the gun,’ and is not retired or moved out of the said path until the min is again closed. It  insures the easy operation of the gun, as it prevents the head of the incoming. cartridge from resting upon or impinging against the forward end of the carrier F, and thus causing the same to work with difficulty. It also prevents the choking of the gun where the cartridges differ slightly in high, in which case, but for the said nose or lug, a short cartridge on the carrier might allow the next cartridge in the magazine to secure a partial entrance in to the receiver, and by fouling the action of the carrier, choke the gun. By the use of this lug or nose, I secure an effective magazine cutoff without complicating the gun by special independently organized devices for that purpose. The forward end of the operating plate E is also constructed with two lifting faces e’ e’, corresponding to each other, and respectively located below and on opposite sides of the nose e forming the magazine cut  off. The extreme forward end of the carrier , rests upon the said lifting faces e’ e’ when the gun is closed, as shown in Fig. 1 of the drawings, the said. cud of the carrier being slotted or cut away to clear the magazine cut off lug e. At the beginning of the opening movement of the gun, the said lifting faces e’ e’ lift the carrier slightly, and hence the head of the cartridge, whereby the said head is brought into range with a .projection g, formed upon the under face of the forward end of the sliding breech bloc ) G, whereby the breechblock is caused to positively engage With the cartridge, and draw the same back into the receiver upon the carrier F,  which is constructed as shown by Figs. 7 and 8 of the drawings, with a depression or pocket.