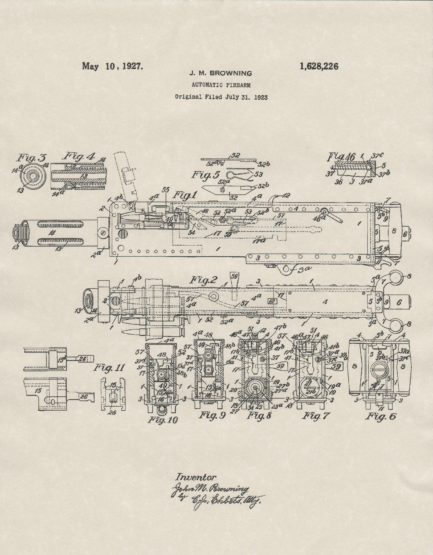 The invention relates generally to automatic machine guns of that description in which all operations of the mechanism are automatically effected by the energy of the recoil of the movable parts. The invention relates particularly to novel’ improvements. in recoil operated machine guns, similar to that disclosed in the Letters Patent of the United States granted to John Browning, No. 1,293,021, dated February 4. 1910, in which the barrel and breech closing block. while interlocked recoil together a limited distance, are then unlocked and the movement of the barrel is arrested; the breech closing block alone continues its recoil during which energy is .stored in reaction springs or similar means by Which all parts are finally returned to their forward firing positions. The main object of the present invention is to produce a machine gun of this class specially adapted for modern military service.

Experience during the war, and experiments since: under actual field conditions, have led the United States War Department to adopt for use in certain branches of the service, such as the Anti-Air Craft. Service and for service in tanks, bullets or projectiles greatly increased in caliber, length and weight, and cartridge cases of increased size capable of holding correspondingly increased charges of most powerful explosives for driving said projectiles and for giving to them greatly increased ranges and power of penetration. The machine gun of the present invention is adapted to fire these modern service cartridges; and while it has necessarily increased dimensions in diameter and length of certain of its parts, such as the barrel and breech mechanism, and of the lengthwise reciprocating movement of its breech opening and closing mechanism, these increases and the necessary strengthening of the entire structure of the machine gun are attained without a nearly proportional increase of the weight of said, machine gun.

This object is attained by providing a composite brake or buffer in rear of the heaviest recoiling of the breech mechanism, said brake consisting of the combination of a spring actuated recoil cushion combined with a brake chamber for holding a liquid by which any excess of energy of recoil is entirely absorbed; and by which even an excess of recoil, such as may possibly be caused by variations in the rate of speed of the ignition of the powder charges by the primers of the cartridges, will be absorbed without disastrous effect on I the structure or the Mechanism of said machine gun. For furthering the attainment of this object there are also provided in rear of the breech closing block cushioning devices for absorbing any excess of energy of recoil of said breech block; as well as devices for strengthening the breech casing of the machine gun supporting said cushioning de vices. Other and further objects and advantages will appear from the following disclosure. By the foregoing and other novel constructions which will be hereinafter fully described and pointed out in the appended claims, an improved machine gun is produced, adapted for firing the modern powerful military, ammunition, reliable, accurate! and absolutely safe under all conditions.

To all whom it may concern; Be it known that I, JOHN M. BROWNING, a citizen of the United States, residing in Ogden, in the county of Weber and State of Utah, have invented certain new and useful Improvements in Automatic. Firearms, of which the following is a specification, reference being had to the accompanying drawings, forming a part hereof. The invention relates to automatic firearms and more particularly to automatic firearms of the recoil operated type in which all the operations of the mechanism, except that of the trigger, are automatically effected. In my prior application for Letters Patent of the United States, Serial No. 680,963, filed December 15,.1923, for automatic firearms, there is shown and described an improved automatic of this character adapted to fire large caliber projectiles such as can be loaded with a high explosive charge, but so light in weight as to be mobile, adapted to be mounted on aircraft and fired from any position, and yet most durable. It is an object of the present invention to improve certain features of the automatic gun disclosed in said prior application and guns of similar character whereby said guns are rendered still more efficient and reliable in operation, simple in construction, and easier of manufacture.

The improved features by which this object is attained comprise novel means for pushing the cartridges into the chamber of the barrel and for supporting and guiding said cartridges before and during such movement, novel means for extracting the empty shell and for steadying and guiding it during extraction, novel means for locking together the transversely movable breech locking and the longitudinally movable lock frame, novel means for readily positioning, supporting and guiding a transversely movable feeder carrying a plurality of cartridges for quick insertion into the transverse feed channel of the gun, and various other details of construction, and combinations and constructions of parts hereinafter more fully described and claimed. In the accompanying drawings : Fig. 1 represents a right hand side elevation of a gun in which. the novel, improved features of the invention are embodied. Fig. 2 represents a central, vertical, longitudinal section through the gun as seen from the right and on an enlarged scale; the barrel and barrel extension and the upper portion of the breech block are shown in section, while the lock frame and parts carried thereby are shown in elevation.